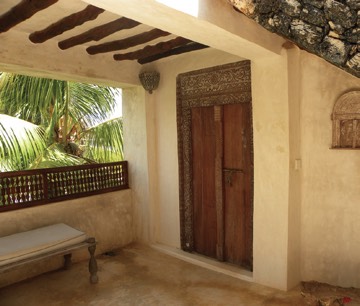 According to legend, Baitil Aman was built in the 18th century by Hajj Abdalla as a gift for his bride, the beautiful Binti Luali of the Shela clan. The building collapsed, but so great was Hajj Abdalla’s love for Binti Luali that he rebuilt the entire palace. Rich with the history that has been played out within its walls, Baitil Aman is an elegant retreat in the centre of Shela Village.

There are 8 en-suite rooms, made up of doubles and triples, on different levels of the house. The rooms are spacious and minimalist, with whitewashed walls, natural wood adornments and traditional Lamu doors.

The lush garden, with vivid flowers and water features, makes a serene setting for the restaurant. Meals can also be served in the dining room or on the rooftop. The menu changes daily, with dishes like fish in banana leaf, prawn masala and stir fried vegetables with coconut rice.

After a 7-year restoration project, the house opened as a guesthouse in 2006. It was renamed Baitil Aman, meaning the house o peace. It has solar heated water and WiFi throughout. Boat trips, tours of Shela Village and other excursions can be arranged.

We don't have an itinerary with Baitil Aman. Please request one!

To find out more, or request a quotation, add Baitil Aman to your list of favourites.

Other Facilities In The Area