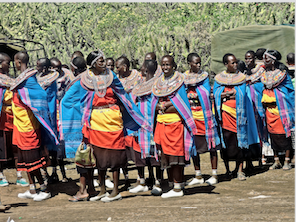 Maulidi is the popular name given to Milad-un-Nabi, an Islamic festival held during the third month of the Muslim calendar to celebrate the birth of the prophet Mohammed. The main religious celebrations take place in and around the Riyadha Mosque. This colourful festival also includes a swimming race and a donkey race.

Last weekend in May

A cross-country off-road rally, Rhino Charge sees modified vehicles racing between checkpoints in harsh and challenging terrain. The chosen venue is announced only a few days before the event. The site has campsites, food stalls and bars, and hosts the infamous post-charge party. This charitable event supports the endangered rhino in the Aberdare National Park and around Kenya. www.rhinocharge.co.ke

A challenging, high altitude marathon, Lewa Marathon sees runners from around the world attempt the half or full marathon. This charitable event is sponsored by Safaricom, and supports education, health, community development and wildlife conservation projects across Kenya. www.lewa.org/support-lewa/safaricom-marathon