This trio of national reserves lies between the lush highlands of southern Kenya and the arid deserts in the north. It is a region of dramatic contrasts in which rare wildlife and diverse birdlife reside. The Ewaso Ngiro River, fringed with giant acacias, figs and doum palms, slices across the scorched land. 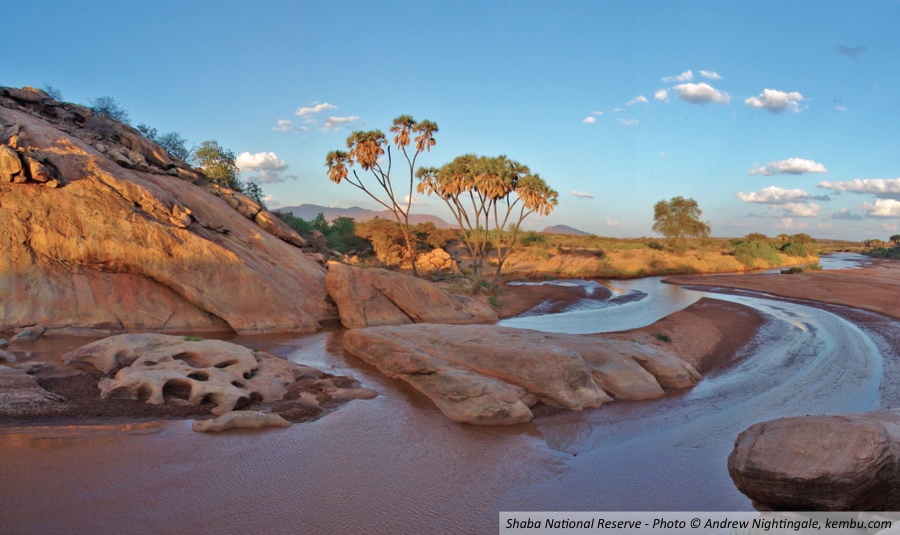 The three reserves can be accessed by road from Isiolo, Maralal and Marsabit. Isiolo has an airport with scheduled flights from destinations in Kenya. The tracks within the reserves are rocky and dusty in the dry season and muddy during the rains; 4WD vehicles are required throughout the year.

The area is home to the Samburu people. Cousins of the nomadic Maasai, the Samburu are semi-nomadic pastoralists. They entered Kenya from Sudan in one of the waves of Nilotic migration, and settled in northern Kenya while the Maasai continued moving south. Like the Maasai, Samburu society has traditionally been organised around cattle, used not only for food, but also for dowries, fines and ceremonies. Visits to local Samburu villages give fascinating insights into their culture and traditions and are a highlight of visiting the region.

Samburu National Reserve gates are Archers Gate and West Gate; The one airstrip is called Samburu Oryx. Lion, leopard, cheetah and crocodile all inhabit the reserve, as well as more unusual wildlife such as gerenuk, Grevy’s zebra, Beisa oryx and reticulated giraffe. There are over 350 species of birds, including Somali ostrich, grey-headed kingfisher, vulturine guineafowl, lilac-breasted roller, red-billed hornbill, secretary bird and Verreaux’s eagle. The harsh terrain is brightened by clusters of vivid desert roses.

The Samburu National Reserve was one of the areas in which conservationists Joy and George Adamson raised Elsa, the lioness of Born Free fame. Joy Adamson’s best selling book was later made into an award winning film. Another famous lioness from Samburu is Kamunyak, who became renowned for adopting oryx calves.

On the other side of the Ewaso Ngiro River, Buffalo Springs National Reserve is less hilly and less dense than Samburu. The reserve gates are Cholcaa Gate and Ngare Mare Gate; the airstrip is called Buffalo Springs. The vegetation is mainly wooded and bushy grassland, riverine forest and swamps. A sparkling oasis at the western end of the reserve gave it its name. This is one of the rare places in which reside both the Burchills zebra and the Grevy’s zebra, and both the Maasai ostrich and the Somali ostrich.

Shaba National Reserve is named for a massive cone of volcanic rock that dominates the area. The solidified lava flow that streams from the rock symbolises the harsh but striking nature of the terrain. Shaba has four springs, making it less arid than Samburu or Buffalo Springs, and a scattering of small hills.

Listings In The Samburu Region 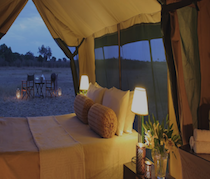 Near Samburu’s famed Ewaso Nyiro Rover, Naibor Samburu is a luxury mobile camp. The camp is seasonal and operates only during the seasons when the remote and stunning Samburu National Reserve is at its best. The 6 en-suite tents are decorated in traditional safari style with comfortable beds, wooden chests, ... 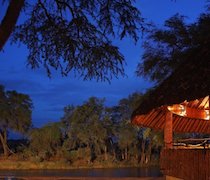 One of Kenya’s original game lodges, Samburu Game Lodge was established in 1962. This traditional safari lodge is strung out along the banks of the Ewaso Nyiro River. The 61 en-suite rooms are made up of standard rooms, river rooms, junior suites and cottages. The standard rooms are near the swimming ... 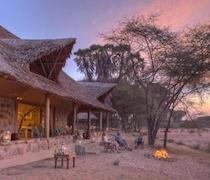 The first community owned rhino sanctuary in Africa opened in 2016. In an area which for over 40 years has seen a continuous fall in the numbers of black rhinos, a group of black rhinos has been re-introduced. Saruni Rhino Camp offers a safari adventure: tracking black rhino on foot with an ...

Majestically situated high on the banks of the Ewaso Nyiro River, Sasaab commands breathtaking views across the arid landscape of northern Kenya towards the jagged peaks of Mt Kenya. Sasaab is located in Westgate Community Land, west of Samburu and Buffalo Springs National Reserves. The 9 luxury open plan rooms are ... 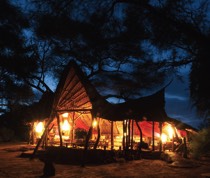 Perched on the banks of the Ewaso Nyiro River, Elephant Watch Camp is home to some of the largest bulls in Samburu who can often be spotted mudding in the river, resting under an acacia tree or picking pods beside the tents. The camp is owned by Oria and Iain ... 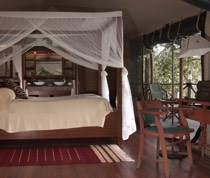 Situated on the banks of the Ewaso Nyiro River in the arid heart of Samburu National Reserve, Samburu Intrepids looks out over riverbanks on which guests have a chance of spotting the rare northern species of reticulated giraffe, Beisa oryx and gerenuk. The 27 en-suite tents, furnished with 4-poster beds, mahogany ... 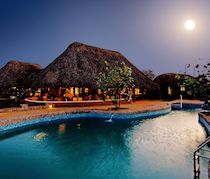 Samburu Sopa Lodge is built on raised ground, giving it panoramic views of the distant Samburu Hills on one side and Mt Kenya on the other. The lodge is designed in rich earth colours and decorated with local artefacts. The lodge overlooks a waterhole which attracts plentiful animal and birdlife. ...

Perched on a rocky outcrop, Saruni Samburu provides a spectacular view of the snowy peaks of Mt Kenya, sacred mountain Ololokwe and the vast savannah. Set in a private 95,000-hectare conservancy bordering Samburu National Reserve, Saruni is a design lodge that offers exclusivity, comfort and tailor-made service. Saruni has two ... 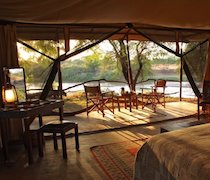 Named after Erik Ole Larsen, a Dane credited with enhancing the style of luxury tented camps, Larsen’s Camp is a camp that would have made him proud. On the banks of the Ewaso Nyiro River, the camp looks out across the pristine wilderness of Samburu National Reserve. There are 20 ... 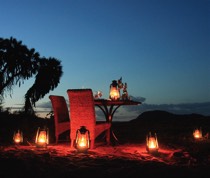 Overlooking Buffalo Springs and Ewaso Nyiro River, Samburu Simba Lodge has views of both arid plains and rushing water. Rare game that is found in this area includes reticulated giraffe, Grevy’s zebra, Beisa oryx and the long necked gerunuk. The area is also well known for elephants. There are 70 ... 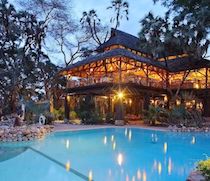 Shaba National Reserve, where Joy Adamson spent her final years reintegrating a lion into the wild, is the untamed wilderness surrounding Sarova Shaba Game Lodge. Resident species in this arid northern reserve include Grevy’s zebra, reticulated giraffe and Beisa oryx. Of the 350 species of birds found here, 5 are endemic ... 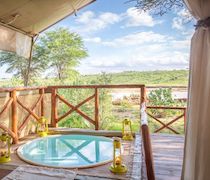 Set on the lush banks of the Ewaso Nyiro River in Samburu National Reserve, Elephant Bedroom Camp is surrounded by doom palms and other indigoenous trees and shrubs. The camp is small and intimate and was designed with simple elegance inspired by the textures and colors of African nature. The 12 ...