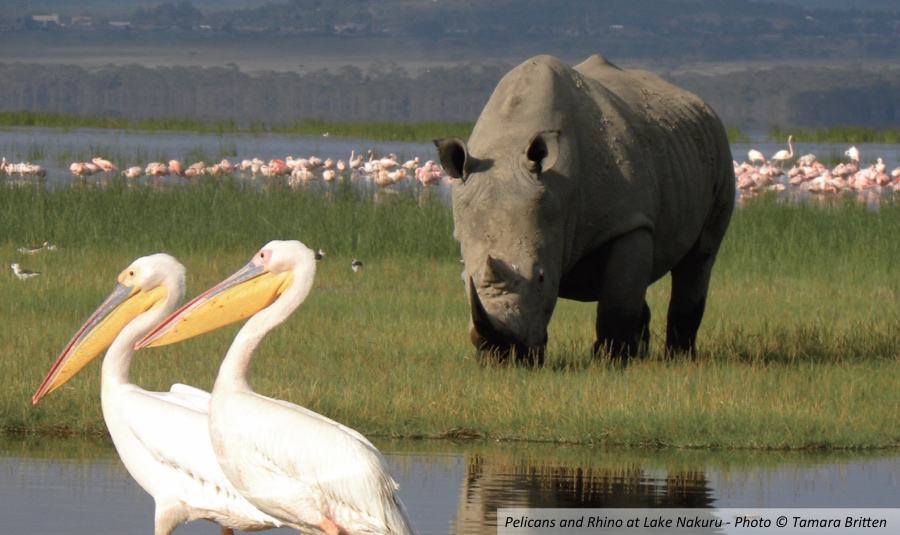 The East African Rift System is one of the geologic wonders of the world. The exact cause of rift formation is still debated, but it is generally accepted that shifts in Tectonic plates caused fractures on the earth’s crust, volcanic eruptions and the formation of inland seas. These huge changes in environment and climate may explain why early man was forced to walk upright in this region, and why the world’s oldest hominid fossils have been found in the Rift Valley.

Lake Baringo lies between the Tugen Hills, an uplifted fault block of volcanic and metamorphic rocks, and the Laikipia Escarpment. The region is inhabited by several tribal groups, most notably Njemps and Pokot. Baringo airstrip is on the mainland; boats connect it to the islands. Seven freshwater fish species inhabit the lake, of which one is endemic. This attractive lake is also home to hippos and crocodiles, and is a critical habitat for significant numbers of migratory water birds.

Lake Bogoria, a saline, alkaline lake, is famous for its therapeutic geysers and resident population of lesser flamingos. The lake was designated a national reserve in 1973.

Lake Nakuru is a soda lake at which 450 species of birds have been recorded, including flamingo, pelican, African fish eagle, goliath heron, hamerkop and Verreaux eagle. The national park comprises the lake and the surrounding forested escarpments and bushy grasslands. The park gates are Main Gate, Lanet Gate and Nderit Gate. Naishi airstrip, inside the park, is suitable for charter flights. The park is a sanctuary for black and white rhino, and is inhabited by 56 other species of mammal. Nearby attractions include Menengai Crater and the prehistoric archaeological sites at Hyrax Hill and Kariandusi.

Lake Naivasha, called Nai’posha, or rough water, in the language of the Maasai, is a freshwater lake. It was used in the 1930s as a landing place for Imperial Airways flying boats between London and Durban. Activities include boat trips, bird watching and game viewing. Mt Longonot National Park, based around an extinct volcano, is a haven for birdlife, especially birds of prey; 103 species have been recorded. The mountain has lovely hikes and climbs; the 3-hour walk around the rim of the crater affords spectacular views.

Lake Magadi, near the Kenya Tanzania border, is a saline, alkaline lake best known for its hot springs and shimmering white expanses of salt. A single species of fish inhabits the hot, salty water. Wading birds, including flamingos, reside here. 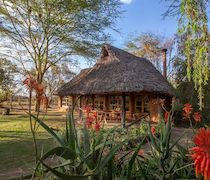 Named after the rare and imposing leopard, Chui Lodge is an elegant retreat overlooking Lake Naivasha, in a private 18,000-acre conservancy. The lodge was crafted from bush stone, and local acacia, olive and leleshwa woods. The lodge and swimming pool overlook a waterhole that attracts plentiful game. There are 8 en-suite ... 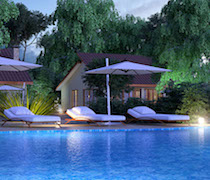 Overlooking a dam filled with fish, Ziwa Bush Camp is a short distance from Lake Nakuru National Park. The camp offers all the facilities of a lodge, and a restaurant with lovely views and an appealing menu. There are 7 executive double rooms, 3 standard twin rooms and 3 family suites. All rooms ... 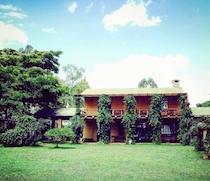 On the shores of Lake Naivasha, this collection of cottages has lovely views of the lake and the animals that graze on its shores. The Cow Shed is a lakeside cottage with 3 double bedrooms, 2 bathrooms, well equipped kitchen, barbecue with outdoor dining area and an upstairs balcony with views of ... 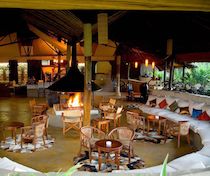 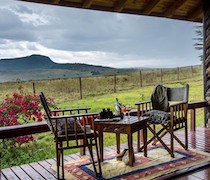 Set in gardens overlooking a swimming pool, Lake Nakuru Lodge is in Lake Nakuru National Park. The park is famed for its abundance of white rhino, and for the wide variety of birdlife, notably flamingos and pelicans, found on the striking lake that lies in the centre of the park. ... 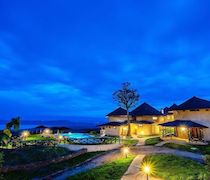 Sopa Lodges have been operating in Kenya and Tanzania for around 30 years. They currently have 5 lodges in Kenya and 3 in Tanzania. Lake Nakuru Sopa opened in 2017. High on the escarpment, the lodge has lovely views across Lake Nakuru National Park and the gleaming lake at its centre. The 60 en-suite rooms ... 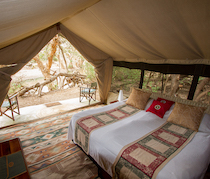 Near the striking Lake Magadi at the southern end of Kenya’s Great Rift Valley lies Shompole Wilderness. This attractive little camp is on the banks of the Ewaso Ngiro River in the shade of giant figs. Johann and Samantha own and manage the camp and home-school their two small ... 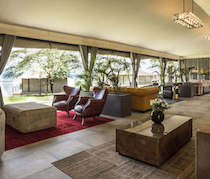 On an escarpment overlooking the lovely Nakuru National Park, The Cliff opened in 2018. It offers elegant tents, a tented lounge and sweeping views of the park. The 10 en-suite tents are set along the escarpment, all providing views across the park. All tents have solid foundations, with freestanding baths looking out ... 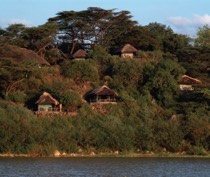 Island Camp was established in 1975, making it one of the original tented camps in Kenya. The camp, on Ol Kokwe Island in Lake Baringo, offers both relaxation and activities; the area is particularly known for its prolific birdlife. The island is owned by the Njemps tribe, and a percentage of ... 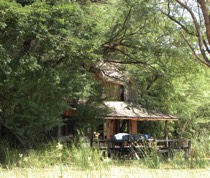 Roberts’ Camp is set in beautiful gardens on the lake, with views of the dramatic cliffs and plateaus that surround it. This friendly camp offers cottages, bandas, tents and a campsite, and an abundance of activities. The area is home to 450 species of birds, as well as hippos and crocodiles. ... 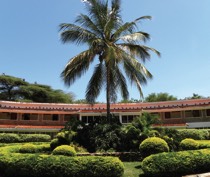 Channelling the therapeutic hot spring geysers of Bogoria through its natural swimming pool, Lake Bogoria Spa Resort has been referred to as the healing place. There are 21 en-suite standard rooms in the main hotel, 23 cottages in the garden with private parking and 2 spacious VIP suites. Ground floor rooms and suites ... 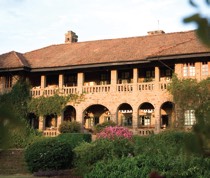 Deloraine House was built in 1920 by Lord Francis Scott, a prominent early settler who was instrumental in developing farms throughout Kenya. A fine example of colonial architecture, the house was visited by Queen Elizabeth, the Queen Mother, on a number of occasions. It is set in a 3,500-acre farm and ... 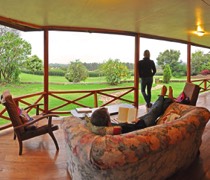 In the lovely grounds of a 900-acre farm, Kembu offers a collection of characterful cottages. With a wide variety of activities, dining options and facilities, Kembu has something for everyone. The romantic Acacia Cottage has an en-suite double room and an attractive conservatory. The Yellow Room has an en-suite twin ... 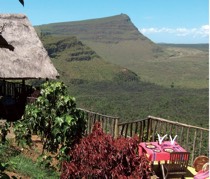 On the edge of the stunning, dormant Menengai Crater, Maili Saba Camp is a tranquil retreat. Guests can do game drives in the nearby Lake Nakuru National Park or can simply relax and enjoy the views from the camp. There are 10 en-suite tents, made up of 8 doubles and 2 family tents. ... 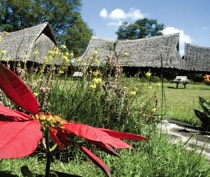 Flamingo Hill Camp is situated just outside Lake Nakuru National Park, 2km from the main gate. This friendly camp is set in landscaped gardens, surrounded by lush natural foliage. There are 25 en-suite tents shaded by thatched roofs, which can be doubles, twins or triples as required. All the tents have ... 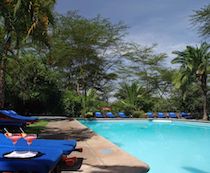 Set on a plateau overlooking Lake Nakuru, Sarova Lion Hill Game Lodge has a striking view across the flamingo-filled lake. The lodge’s beautifully landscaped gardens, with natural foliage and wide variety of flowers, are surrounded by a 24hr electrical fence. The 67 bedrooms are made up of 64 standard rooms and 3 ... 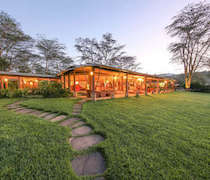 Lake Elmenteita Serena Camp was established in 2011. The camp overlooks Lake Elementaita and offers a selection of facilities and activities. It’s owned and operated by Serena Hotels. There are 24 en-suite tents and 1 suite. All tents are equipped with telephone, WiFi, minibar, electronic safe, kettle and hairdryer. All tents also ... 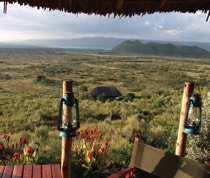 Sleeping Warrior Lodge was established in 2011. The lodge is located on Soysambu Conservancy, and offers lovely views of Lake Elementaita and across the Rift Valley. Soysambu is home to 450 species of bird, including the great white pelican, flamingo, cormorants, waders and storks. There are 7 en-suite bungalows, made up of 6 1-bedroom ... 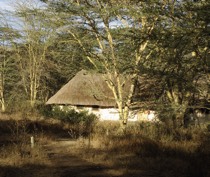 Kigio Wildlife Conservancy is a 3,500-acre conservancy of riverine and euphorbia woodlands, short grass and leleshwa shrub. Wildlife includes the endangered Rothschild giraffe, hippo and leopard; over 250 bird species have been recorded. The conservancy is dedicated to wildlife, environment and the community, and has been recognised by Tusk Trust, Born ... 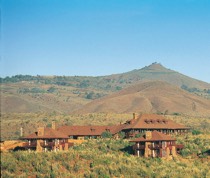 Straddling the rim of the Rift Valley, at an altitude of 2,100m, the Great Rift Valley Lodge and Golf Resort looks out over this extraordinary natural fissure that cuts through 2 continents. Built around an 18-hole golf course, the lodge boasts panoramic views. The 12 twin and 9 double rooms all have lounges ... 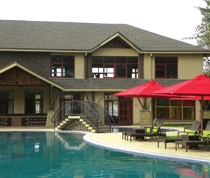 Enashipai is a Maasai term meaning a state of happiness. This stylish new resort has created chic modern structures from traditional Maasai designs. Enashipai Resort and Spa opened as Lake Naivasha Holiday Inn in 2008, and was comprehensively redesigned and refurbished in 2011. There are 50 en-suite rooms, made up of 9 standard and 41 ... 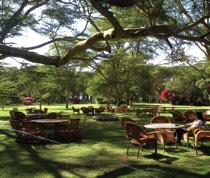 Lake Naivasha Country Club became famous in the 1930s, when it was a staging post for the Imperial Airways’ flying boat service from Durban to London. The club is situated on the shores of Lake Naivasha, in 12 hectares of lawns. There are 39 standard rooms, 3 family rooms, 7 executive cottages and 1 presidential ... 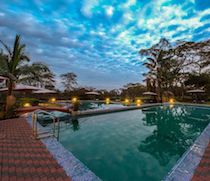 Lake Naivasha Sopa Resort is situated on 120 acres of lakefront gardens. The lodge is approached by a stone path along the side of a pond surrounded by plants. The resort is decorated with wrought iron chandeliers and African artefacts. There are 84 en-suite rooms. The rooms are located in 21 cottages, built ... 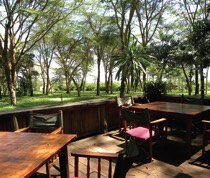 One of the original camps on Lake Naivasha, Fisherman’s Camp is popular with locals and visitors alike. The circular bar and restaurant overlook large gardens sloping down to the lake’s edge. The camp offers self-catering accommodation, a lively restaurant and bar and a campsite. There are 4 bandas, each ... 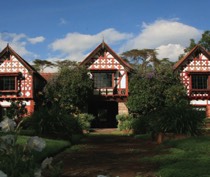 Hippo Point is a private wildlife sanctuary on the shores of Lake Naivasha. It aims to be a slow safari, a place where visitors relax and commune with nature. The sanctuary includes a wellness retreat and offers a selection of activities. Dodo’s Tower is an 8-floor tower, rated as 1 ... 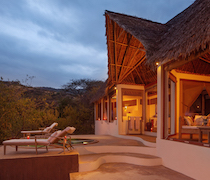 Lentorre Lodge, in the Lake Magadi area, is an elegant lodge on an escarpment with stunning views on all sides. The luxury lodge opened in 2014. The 6 en-suite cottages - 4 double and 2 family - are adorned with stylish hand-carved furniture. Each cottage has a private plunge pool on the verandah from ...