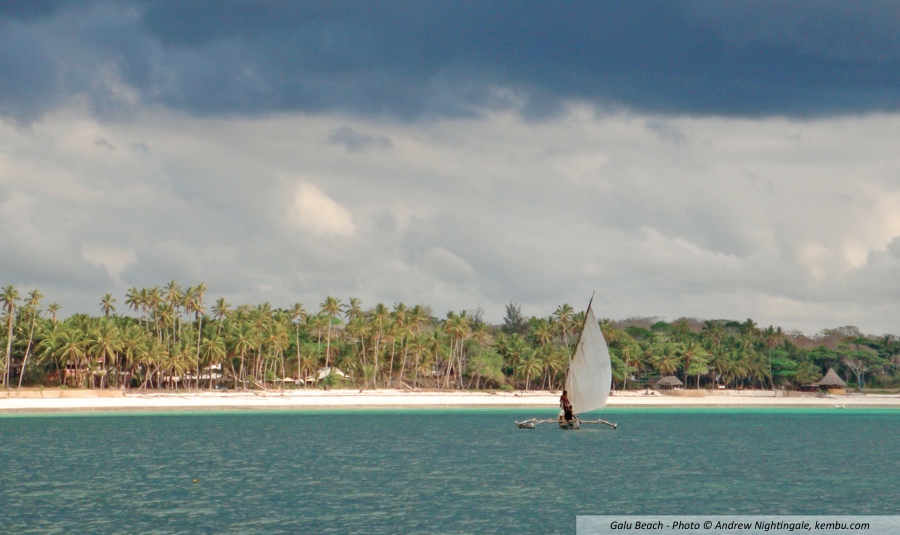 What is referred to as the South Coast is the southern half of Kenya’s east coast, linked to Mombasa Island by the Likoni car and passenger ferry. The beaches, joined by a coastal road, are Shelly, Pungu, Sand Island, Tiwi, Diani, Galu, Kinondo, Msambweni and Shimoni. The main islands are Chale, Funzi and Wasini. Ukunda Airport, near Diani Beach, has daily scheduled flights to destinations in Kenya. Moi International Airport is located on Mombasa Island. The area has traditionally been inhabited by the Wakamba, Digo and Duruma people.

Diani Beach is the longest and liveliest of the beaches. It offers a plethora of water sports including kite surfing, windsurfing, scuba diving, snorkelling and jet skiing. Golf courses, spas, restaurants, bars, nightclubs, tour operators and shops are all found here. The Colobus Trust, based in Diani, protects the rare colobus monkey; tours of the research station reveal the monkey in its natural habitat.

Kisite Mpunguti Marine Park covers a marine area with four small islands surrounded by coral reef. The islands have dense coastal equatorial forests; sea grass and marine algae cover the reef. Attractions include dolphins and coral gardens. More than 250 fish species have been recorded. Snorkelling, scuba diving, bird watching and camping are all on offer. The marine park headquarters, at which park fees should be paid, is situated on the mainland, at Shimoni.

Shimoni, meaning the place of the caves in Swahili, is a coastal fishing village south of Diani. The caves are believed to have been holding pens for slaves prior to their transportation to Zanzibar. Now a community owned project, the caves provide an income for the local people. From Shimoni, boat trips go to Wasini Island and Kisite Mpunguti Marine Park, both famed for snorkelling.

The Shimba Hills National Reserve has one of the largest coastal forests in East Africa, after Arabuko Sokoke Forest, near Watamu. Park gates are at Main Gate, Kivumoni, Kidongo and Shimba. There are four campsites, including one at the lovely Sheldrick Falls. The reserve is rich in flora and fauna, and is home to the highest density of elephant in Kenya. Other species of interest include the rare Sable antelope, leopard, genet cat, greater galago, elephant shrew, bushy tailed mongoose and fruit bat. 111 bird species have been recorded, including 22 which are coastal endemic such as African hawk-eagle, greater honeyguide, crowned hornbill and uluguru violet-backed sunbird. Activities include game viewing, bird watching, camping and trekking.

Mwaluganje Elephant Sanctuary was established in 1995. A community owned project, it covers an ancient elephant migration route between the Shimba Hills and Mwaluganje Forest. The sanctuary is also known for its rare cycad forest.

Listings In The South Coast Region 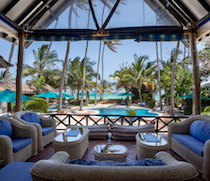 This attractive Swahili resort is on the beachfront of award-winning Diani Beach. The resort is the sister property to the eco-lodge, Lion’s Bluff, in Tsavo: known familiarly as the View with a Lodge. The 6 en-suite chalets each have hand-carved furniture, aircon, fan, hairdryer, dressing gown and Wifi; their bathrooms ... 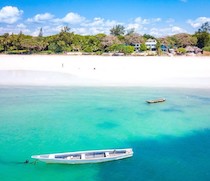 On the beachfront of award-winning Diani Beach, Tequila Sunrise is in 4 acres of natural forest that hosts Colobus, Sykes and Vervet monkeys. Ancient baobab trees surround the resort; the villa and apartments can be taken together or separately. The villa has 3 en-suite rooms and can sleep 6 adults and 2 children. It ... 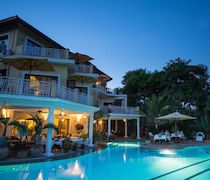 Facing onto the white sands of award-winning Diani Beach, AfroChic is an exotic getaway. The boutique hotel lives up to its name by being both African and chic. The 10 en-suite rooms are made up of ocean view, garden view, junior suite and executive suite. All rooms are designed individually with ... 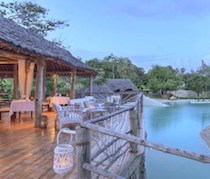 The Ocean Spa Lodge, on a private beach south of Msambweni, offers exclusive luxury and elegant beachfront villas. It has the largest infinity pool in East Africa and a state-of-the-art spa tailored to health and wellness. There are 14 luxury suites in 6 beautiful thatched villas. Every suite has an ocean view, ... 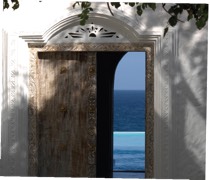 Meaning land of the Sable antelope, Msambweni Beach House and Private Villas is as striking as this rare creature. The Arabic architecture of the house sets whitewashed walls, high arches and turreted roofs against the bright colours of the coast. A 25m infinity pool and the winding jetty end in ... 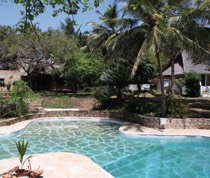 Shimoni Reef was originally an outpost base for One Earth Safaris, the first company to really explore these waters, diving in the Pemba Channel and investigating the outer reefs. Now Shimoni Reef Lodge gives guests the chance to experience this pristine ocean reserve. The lodge has 6 Swahili style cottages, 1 self-catering ... 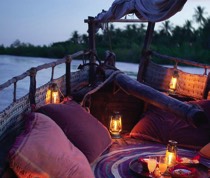 Tucked away on an idyllic island, Funzi Keys is a remote and exclusive resort. Funzi Keys, surrounded by water on its own private peninsular, offers luxurious seclusion. There are 9 seafront cottages, including 2 cottages designed for families. There are also 8 sea view cottages. The spacious cottages have stone walls, thatched roofs ...

View
The Sands At Chale Island 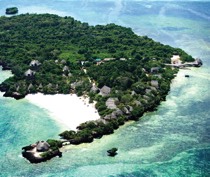 Chale Island, about 50km south of Mombasa, is a stunning island fringed by white sand beaches and a coral reef. At its centre is a tidal salt water lake surrounded by mangroves. The Sands at Chale Island is a contemporary mix of Swahili structures, Italian stucco, Lamu furniture and African ... 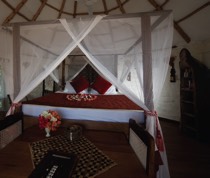 Situated in a private cove alongside a fishing community, Cove Retreat is a unique collection of tree houses. Its rustic design and secluded location make it a true retreat from modern living. There are 6 tree houses, each in its own baobab tree. Each tree house has its own Jacuzzi, terrace ... 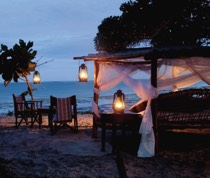 Located on a tranquil private beach south of Diani, Kinondo Kwetu is surrounded by holy forests and sacred land. Kinondo Kwetu is both an all inclusive luxury resort and a serene retreat. Mama Taa Villa has 6 suites, 3 upstairs and 3 downstairs. Mama Tina Villa has 1 en-suite double room and 2 single rooms ... 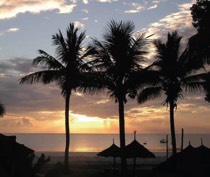 Situated on the beachfront, Pinewood Village is known for its personal service and its fully equipped water sports centre. The 38 en-suite 1st floor rooms and the 20 en-suite ground floor suites are gathered in clusters around the gardens. The 36 deluxe rooms overlook the garden while the 2 executive rooms look onto the ... 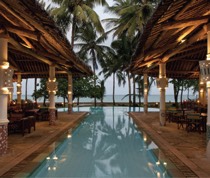 In tropical gardens on Galu Beach, Sentido Neptune Village Beach Resort has a wide selection of facilities and activities. The 166 en-suite rooms are made up of 90 standard rooms, including 15 interconnecting rooms for families, 66 superior rooms and 2 junior suites. The rooms are all equipped with telephone, satellite TV, safe and aircon, ... 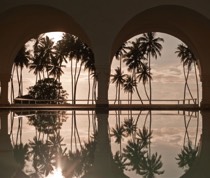 With a name that means embodied perfection in Swahili, Mzima offers luxury, wellness and balanced living. Mzima was established in 2011 and combines coastal architecture with that of ancient Rome. The resort faces directly onto Galu Beach, and is surrounded by lush tropical gardens and a swimming pool. There are 5 en-suite ... 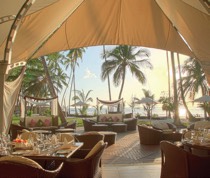 Almanara Diani Beach Resort is an exclusive collection of private villas in lush beachfront gardens. The 6 executive villas each have 3 en-suite double bedrooms, an open plan dining and living area, a study area with PC, printer, WiFi and international telephone, a fully stocked kitchen, a rooftop terrace and a spacious ... 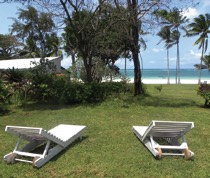 Four Twenty South is named for its latitude, since at the time it was built there was nothing on the site to locate it. This delightful collection of beachfront cottages was built in the 1950s, and has been run by the same family since 1966. There are 6 well-spaced cottages in palm ... 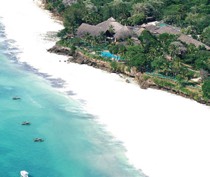 Set in indigenous forests, Baobab Beach Resort & Spa is surrounded by grounds humming with over 100 species of birds, 4 species of monkeys and other forest dwelling wildlife. The resort won the TUI Environmental Champion Award in 2006 and 2007. The Baobab main building has 87 sea facing rooms. There are also 68 garden bungalows ...

View
The Sands At Nomad 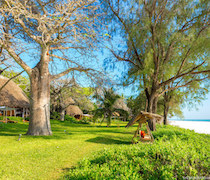 Originally known for Nomad, its popular beach bar and restaurant, The Sands at Nomad is an elegant boutique hotel. The Venetian stucco building is adorned with traditional Swahili furniture and hand-carved African artefacts. The hotel is set in 25 acres of indigenous coastal forest stretching along Diani Beach. There are 18 en-suite ...

Named after the vivid tree in its luxuriant garden, Flamboyant Boutique Hotel was a family house that has been redesigned as an elegant small hotel. The hotel is family run and offers privacy, quality service and attention to detail. The 10 en-suite rooms are made up of 2 honeymoon suites and 8 standard ... 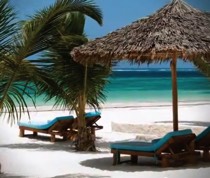 Combining Mediterranean and Swahili styles, WaterLovers is a charming, small hotel on Diani’s beachfront. The hotel provides chic décor and personal service. The 6 split-level cottages are equipped with aircon, fan, mosquito nets, security box, kettles and SIM cards for guests to use in their personal mobile phones. Both ... 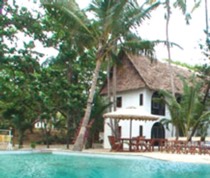 One of the original houses in Diani, Watano House is an attractive and spacious beachfront villa. Behind Watano House, also with access to the beach, are 2 smaller cottages available for rent. The compound can be taken as a whole, or the house and cottages can be taken separately. Watano House ... 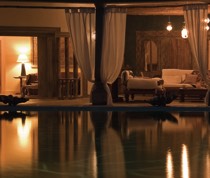 Alfajiri Villas are 3 elegant villas on coral cliffs, with magnificent views of the coastline. The villas are ornamented with Lamu doors, African artefacts and flowing fabrics. The Cliff Villa, Caribbean style, has 2 double bedrooms, 1 twin room and 1 triple room, all en-suite with aircon. It also has a dining room, sitting ... 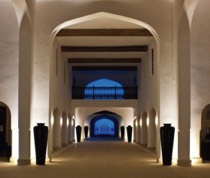 Swahili Beach, a luxurious and sophisticated resort, was established in 2011. The resort blends the architecture of the East African coast with the influences of Arabia, India and Zanzibar. It was designed with state of the art technologies to ensure minimum ecological impact. There are 140 en-suite rooms, made up of 16 standard, 110 ... 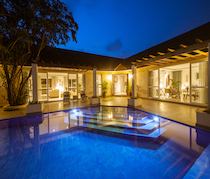 Leopard Beach Resort and Spa is set in 25 acres of beachfront tropical gardens. The 158 en-suite rooms are made up of 70 standard rooms, 20 superior garden view rooms, 48 superior sea facing rooms, 7 suites, 10 Chui class cottages with private gardens or patios and 3 luxury villas. All rooms are equipped with aircon, satellite TV, ... 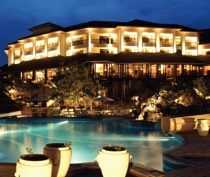 The award winning Diani Reef Resort and Spa offers a wide variety of facilities and activities on Diani Beach. There are 143 en-suite rooms, made up of 2 presidential suites, 2 penthouse suites, 9 junior suites, 6 deluxe rooms, 104 sea facing rooms and 20 garden facing rooms. All rooms are equipped with aircon, satellite TV, internet, ... 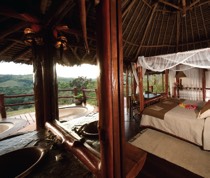 Elevated from the coastal plain, Sable Valley Treehouses is located high in the Shimba Hills. Named after the rare sable antelope which is endemic to this area, the retreat is a romantic haven, with access both to a forested wildlife sanctuary and to the coast. There are 2 exclusive tree houses. ... 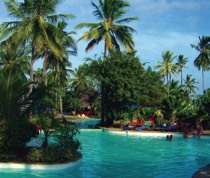 Amani Tiwi Beach Resort is set in 20 acres of lush tropical grounds. The resort was fully refurbished in 2011, and is designed with stunning views of the Indian Ocean. There are 213 en-suite rooms, made up of 178 standard, 10 premier, 16 superior, 3 junior suites, 2 executive suites and 4 rooms designed for guests with disabilities. The ... 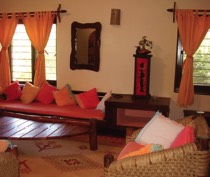 Set in beachfront gardens on Sand Island Beach, Hillpark Hotel Tiwi Beach, formerly known as Maweni and Capricho, offers a selection of cottages and hotel rooms. The cottages either face the beach or are surrounded by attractive gardens. There are 26 self-catering cottages, made up of 1, 2, 3 and 4-bedroom cottages. There are ... 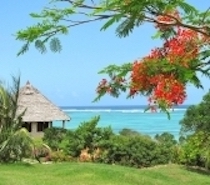 Overlooking its own private and secluded beach between Mombasa and Diani, Tijara Beach Boutique Hotel is a perfect location for a peaceful, romantic holiday. Situated approximately 9km south of Mombasa Island, the house is a luxurious retreat. There are 4 cottages in 5 acres of beachfront gardens, made up of 3 standard and 1 ... 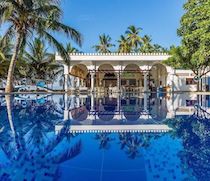 Lantana Galu Beach, on Galu beachfront, is a collection of luxury villas, apartments, bungalows and penthouses in landscaped gardens. The contemporary Swahili architecture, traditional carved furniture and coral walls create an atmosphere that is both lavish and modern. The accommodation is all self-catering, with housekeeping service. The 20 villas have 3 en-suite ...