The huge herds of elephant that roam through Amboseli National Park have made it a centre for elephant research. The park also hosts a wide variety of other wildlife and over 600 species of birds. Highlights of Amboseli include Observation Hill and spectacular views of Mt Kilimanjaro. 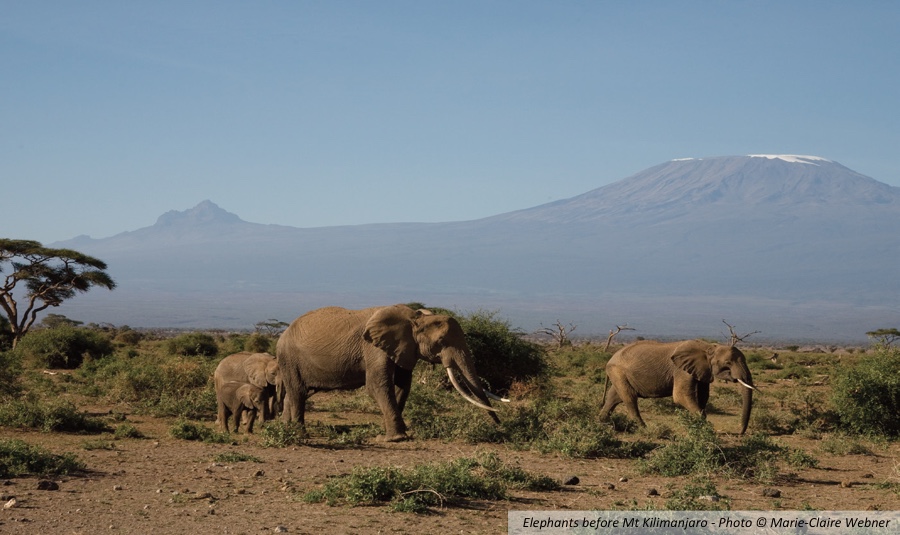 The region was originally known as Empusel, meaning salty, dusty place in the language of the Maasai. The park was set aside as the Southern Reserve for Maasai in 1906, but was made a Game Reserve in 1948 and, to protect its unique ecosystem, a National Park in 1974. The park has semi-arid vegetation, a dried up Pleistocene lake and several swamps. The greater Amboseli ecosystem is a critical environmental bridge that links the two Tsavo National Parks to its east with the Rift Valley and the Serengeti-Mara ecosystem to its west.

The park can be accessed by road from Nairobi through Namanga. Roads also link it to the Chyulu Hills and to Tsavo West National Park. Park gates are Olkelunyiet, Meshanani, Kitrua and Iremito. There is one airstrip inside the park. Other airstrips nearby are at Kilimanjaro Buffalo Lodge and Namanga town. As well as the world-famous elephant herds, resident wildlife includes lion, leopard, cheetah, wild dog, buffalo, rhino, giraffe, zebra, crocodile, mongoose, hyrax, lesser kudu and porcupine.

Observation Hill gives panoramic views of the park. The swamp below Observation Hill attracts high numbers of elephants, buffalos and hippos, as well as a variety of waterfowl like pelican and Egyptian goose. Activities include game viewing, bird watching and camping.

Cynthia Moss started the Amboseli Elephant Research Project in Amboseli National Park in 1972. Since then she and her research associates have identified and recorded, often by name, more than 1,400 elephants. This research has contributed significantly to the conservation of the African elephant. Her books include Elephant Memories, Echo of the Elephants and Elephant Woman, as well as a children’s picture book called Little Big Ears: The Story of Ely.

The Amboseli area is home to the Maasai people. Traditionally nomadic, the Maasai are a Nilotic people famed for their prowess as warriors. Their most prized possessions are cattle, which represent wealth to the Maasai and are used, not only for food, but also for dowries, fines and ceremonies. The Maasai pass through a series of rites of passage, ceremonies and celebrations in their lives, taking them from initiation through the levels of warriors to the highly respected position of elder. Some Maasai villages in the Amboseli region are open to visitors, and give an insight into the culture and traditions of the Maasai people.

Namanga, to the west of Amboseli, is a major border crossing between Kenya and Tanzania. Buses run frequently between Nairobi and Arusha. Tourist visas can be purchased at the border.

Listings In The Amboseli Region 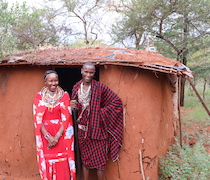 Near Amboseli National Park, Mutuleu is an authentic Masai Village that welcomes visitors to stay in their traditional houses, taste their local food and experience their age-old culture. There are 8 en-suite manyattas, with twin beds in each. The manyattas are formed of cow dung clay, with wooden shelves, woven rugs, ... 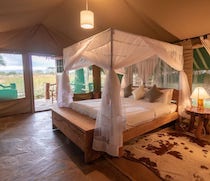 Named after the highest peak of Mt Kilimanjaro, Kibo Safari Camp is an authentic tented safari camp with striking views of the mountain. There are 71 en-suite tents, shaded by thatched roofs. They are furnished with rustic furniture including solid wood bed, mosquito net, clothes rack, writing table and chair. All ... 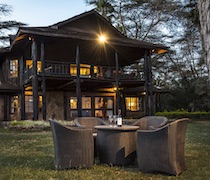 At the foot of Mt Kilimanjaro, Kibo Villa is an elegant log cabin built in stone and gum tree. The villa is sheltered by a copse of indigenous acacia tortilis trees in 5 acres of garden, and offers both peace and privacy. There are 3 en-suite bedrooms, named after Amboseli’s well ... 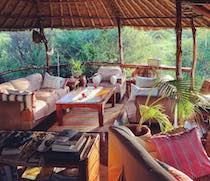 In the foothills of Mt Kilimanjaro, Africa’s highest mountain, Amboseli Bush Camp is an affordable haven. With great views and complete privacy, this is the ultimate getaway. There are 2 separate self-catering camps. One has 3 en-suite tents and the other has 2 en-suite tents; bathrooms have safari showers. Each camp has ... 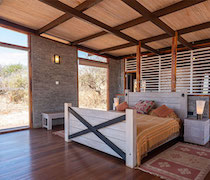 In the Noolarami Conservancy bordering Amboseli National Park, Elephant Gorge Camp is the only camp on this newly founded conservancy. The camp offers an authentic bush experience and lovely views over Lalarashi Gorge. The 5 en-suite rooms are called the Hunter, the Adventurer, the Artist, the Bird Watcher and the Moran. ... 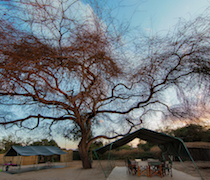 In Selenkay Conservation Area, Selenkay Adventure Camp gives access to this private conservancy in a simple camp. The 15,000-acre private game reserve, owned by the Kisonko clan of the Maasai people, is an important wildlife corridor for animals moving in and out of Amboseli National Park. This area has known ...

View
Tandala and The Candle House 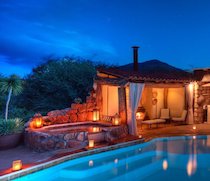 The Roberts family’s lovely bush house is located between Nairobi and Amboseli. The house, taken exclusively, has dark wooden floors, exposed timber beams and warming log fires. The house and its verandas look out over a waterhole; the garden has flower lined paths and lily filled ponds. The house ... 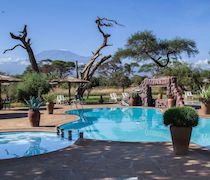 On the edge of Amboseli National Park, Sentrim Amboseli Camp has striking views of Mt Kilimanjaro. The camp is located near Olkelunyiet Gate. There are 60 en-suite tents, made up of 34 doubles, 16 twins and 10 triples. All tents are equipped with electronic safety deposit box, minibar, fan, hairdryer and kettle, and all ... 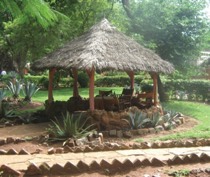 Namanga River Lodge was established in 1934, as a colonial hotel, and was refurbished in 2010. The lodge is located at Namanga, on the Kenya Tanzania border, with views of Ol Doinyo Orok mountain. It offers a variety of activities in peaceful surroundings. There are 30 en-suite rooms, made up of 20 standard and 10 ... 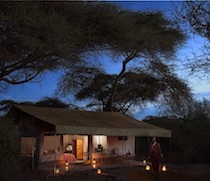 Amboseli Porini Camp is the only camp located in Selenkay Conservation Area, a 15,000-acre private game reserve near the northern boundary of Amboseli National Reserve. The conservancy, owned by the Kisonko clan of the Maasai people, is an important wildlife corridor for animals moving in and out of the reserve. ... 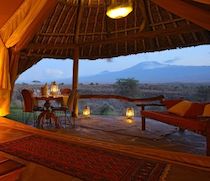 From a grove of the acacia tortilis trees that gave the camp its name, Tortilis Camp looks across the plains at Mt Kilimanjaro. Set in a 20,000-acre private concession bordering Amboseli National Park, Tortilis has a reputation for charm and attention to detail. There are 17 spacious en-suite tents, made up ... 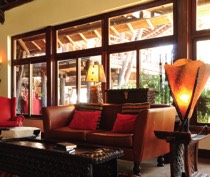 At the foot of Mt Kilimanjaro, Ol Tukai Lodge is in Amboseli National Park. With log cabins, raised wooden walkways and manicured lawns, the lodge makes an attractive place from which to view the famous elephants of Amboseli. The 80 en-suite rooms are chalet-style, with uninterrupted views of the wetland or ... 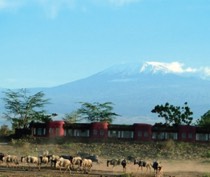 Framed against the stunning backdrop of Africa’s highest mountain, Mt Kilimanjaro, Amboseli Serena Lodge is in Amboseli National Park. The lodge, set along the banks of a flowing natural spring and surrounded by rolling grasslands, is patrolled by the vast herds of elephant for which Amboseli is famed. A ... 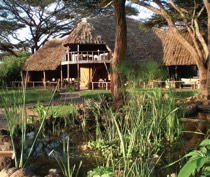 Tawi Lodge is located on a private conservancy of 6,000 acres at the foot of Mt Kilimanjaro. This community-run conservancy, together with African Wildlife Foundation, promotes and maintains development and interaction between wildlife and the Maasai people along the corridor between Amboseli and the Chyulu Hills. The lodge is an eco-friendly ... 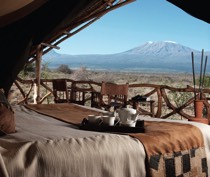 Set in a 5000-acre private conservation area southeast of Amboseli National Park, Satao Elerai Safari Camp offers exclusive game viewing. The camp looks down onto Amboseli in one direction, and up towards Mt Kilimanjaro in the other, giving panoramic views. There are 9 en-suite tents, all of which face the mountain, ... 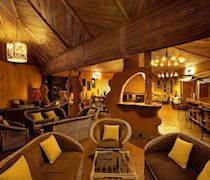 Amboseli Sopa Lodge sits in 190 acres of wooded land at the foot of Mt Kilimanjaro. The lodge is designed to reflect the style of the Maasai: its reception replicates the entrance to a Maasai hut and its ornaments are silver spear heads, beaded necklaces and wrought iron Maasai figures. There ...