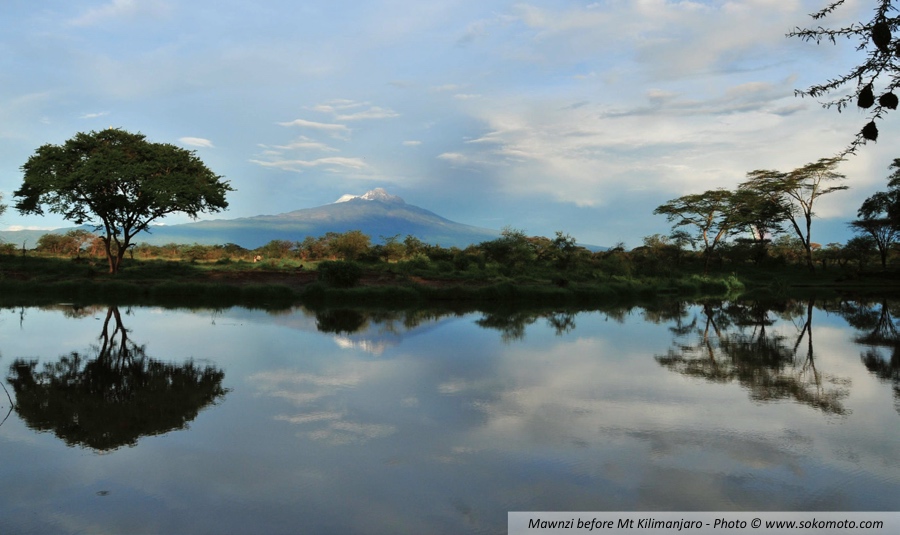 Tsavo National Park was established in 1948 and formed one of the largest national parks in the world. The park was later split into East and West, on either side of the Nairobi Mombasa Highway, for administrative purposes. Tsavo West adjoins the Chyulu Hills National Park. Park gates are at Tsavo, Lake Jipe, Mtito Andei, Chyulu, Maktau and Ziwani. Airstrips are located at Kamboyo, Kilaguni, Tsavo Gate, Jipe, Kasigau, Finch Hattons, Ziwani and Maktau. Park fees should be paid to Kenya Wildlife Service, KWS; current rates can be obtained from KWS.

At Mzima Springs, water filtered underground from the Chyulu Hills erupts from below a lava ridge into a series of clear pools. Lake Jipe, on the Kenya Tanzania border, is fed by runoff from Mt Kilimanjaro and attracts what is thought to be the largest variety of aquatic birdlife in Africa.

Taita Hills Wildlife Sanctuary, with wooded hills and steep winding roads, has plentiful wildlife and rare species of birds and butterflies. Lumo Community Wildlife Sanctuary is formed of three group ranches which have united to preserve this vital wildlife corridor.

Ngulia Rhino Sanctuary, at the foot of the Ngulia Hills, was established to protect the rare black rhino. Now over 50 black rhino are found in the sanctuary. The Roaring Rocks, named for the buzz of cicadas that billows around them, have panoramic views over the sanctuary and make a spectacular observation point from which to look for rhinos or enjoy a sundowner.

Shetani, meaning evil in Swahili, was the name given by locals to the vast flow of lava that spurted from the earth. The Shetani Lava Flow is 8km long; trees entwine with chunks of solid magma, and in places form caves.

The plains of Tsavo were the site of a number of World War I battles between the British, based in Kenya which was then a British protectorate, and the Germans, based in what was then Tanganika, now Tanzania. Tours of battlefields and war cemeteries are available. One of the most eccentric campaigns, immortalised in the film Shout at the Devil, featured fleets of Rolls Royces; its final surrender came three months after the rest of the world had signed an armistice.

Listings In The Tsavo West Region 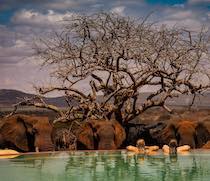 Established in 2021, Hildana Lodge is in a 5,000-acre sanctuary at the foot of the Taita Hills. The lodge is in the heart of the elephant corridor that connects Tsavo East and West. On the edge of a large family-run sisal plantation, the lodge plays a significant role in the conservation ... 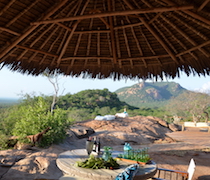 Established in 2012, Kipalo Hills has lovely views of Mbulia Hills, Tsavo National Park and, on a clear day, Mt Kilimanjaro. Meaning ‘a special place one returns to again and again’, Kipalo is just that. The only camp in Mbulia Conservancy, Kipalo offers peace, privacy and plentiful wildlife. The 8 en-suite tents ...

Based on the design of a German fortress, Taita Hills Game Lodge is located in an area rich in World War I history. With its 2 conference rooms and trained staff, this lodge is a good base for meetings, incentives and experiential learning. The lodge has 62 rooms on 3 floors, made up ... 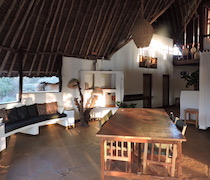 Tsavo Conservancy is an important migration corridor between Tsavo East and Tsavo West, enabling animals to roam freely between the two national parks. The conservancy comprises 7 group ranches, giving the area improved conservation management and increased job opportunities for the local communities. Kivuli Camp, in the Tsavo Conservancy, has 16 traditional ... 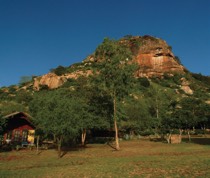 Formerly a hunters’ camp, Rockside Camp is situated at the foot of a rocky kopje known as Kale 1. The camp is personally hosted by its owners, Mark and Nana Tozer. This striking location offers the option of climbing the kopje, or of admiring it from the luxury of the camp. ... 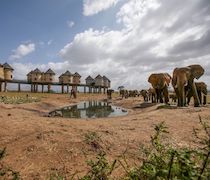 Salt Lick Game Lodge is a unique architectural concept consisting of 96 distinctive oval-shaped rooms overlooking a waterhole and salt lick. These special constructions, elevated on stilts, give uninterrupted views of animals in close proximity. Suspended walkways, a tunnel with bunker and special windows ensure close-up viewing of game at the ... 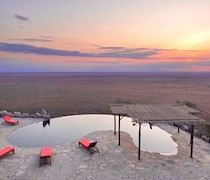 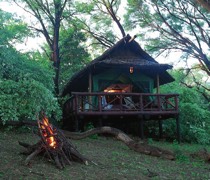 On a 30,000-acre private farm on the western edge of Tsavo West National Park, Voyager Ziwani is a tented camp. Sitting on the verge of Ziwa Dam on the Sante River, the camp looks out on the hippos that have made this their home. There are 25 en-suite tents, 16 on the ... 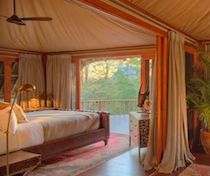 Denys Finch Hatton, an English aristocrat, first travelled to East Africa in 1911 at the age of 24. His name soon became synonymous with elegance, style and adventure. His courage, his charm and his insistence on crystal and fine cuisine while on safari have been recreated in this camp named after him. ... 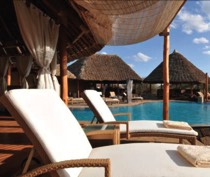 Set in Tsavo West National Park, Severin Safari Camp is an eco-friendly camp overlooking a floodlit waterhole. The camp received an award from TÜV Rhineland in Germany for the quality of its service and its spa. There are 27 en-suite rooms, equipped with WiFi, and spread over 25 hectares of bush ... 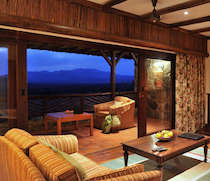 Kilaguni, meaning young rhino, in the language of the Kamba, is located on a ridge with sweeping views of the Chyulu Hills at the foot of Mt Kilimanjaro. Opened in 1962, Kilaguni Lodge was the first safari lodge ever to be built in a national park. It has been under the ... 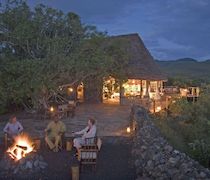 The Chyulu Hills, called The Green Hills of Africa by Ernest Hemmingway, provide the setting for the 1,036km2 group ranch on which Campi ya Kanzi is situated. The diverse beauty Hemmingway loved is here, from savannah grasslands to green river woodlands, from cool mountain forests to the volcanic hills themselves. ... 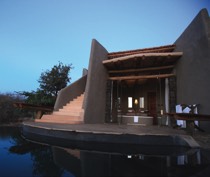 Ol Donyo Lodge, in 275,000-acre Mbirikani Maasai Group Ranch on the slopes of the Chyulu Hills National Park, has stunning views of Mt Kilimanjaro. In the path of traditional wildlife migration routes, the lodge is ideally situated to view the abundant wildlife. The lodge was built in the 1980s and ...