Made up of a collection of idyllic islands at the northern end of Kenya’s coastline, the Lamu Archipelago is living history. The Old Town’s narrow alleys, Arabic architecture, fort and mosques speak of age old culture, while the surrounding beaches and reefs sparkle in today’s sunshine. 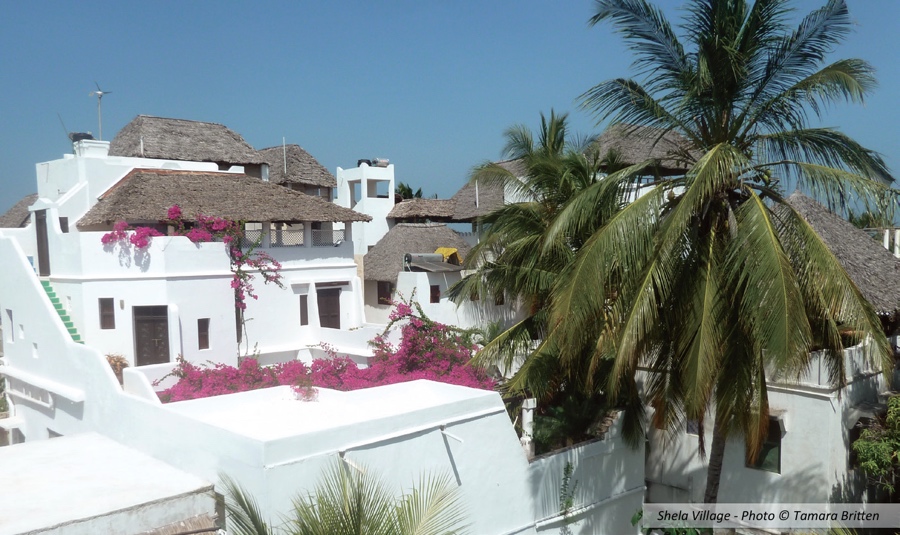 There are four main islands: Lamu, Manda, Pate and Kiwayu. The airport is on Manda Island; dhows ferry new arrivals from the pier beside the airport to other islands. There are no vehicles on the islands. Residents and visitors walk, ride donkeys or take boats. The people of Lamu are predominantly Muslim. Activities include dhow cruises, water sports, big game fishing and bird watching. Festivals of interest include the Lamu Cultural Festival in November, the Islamic Festival of Maulidi in December, the Lamu Art Festival in February, the Lamu Yoga Festival in March and the Lamu Food Festival in April.

Lamu Old Town was designated a UNESCO World Heritage Site in 2001. Stories abound of Chinese ships visiting over a thousand years ago, but the first written testimony of the island dates to 1441, when an Arab traveller met a judge from Lamu in Mecca. Waves of invasions, including the Portuguese, Omani and British, did not hinder the island from becoming a trading centre known for arts, crafts, ivory and slaves. Of interest in the Old Town are the Sultan’s Fort, Lamu Museum, Shiaithna Asheri Mosque, German Postal Museum and donkey sanctuary.

Shela Village, on Lamu Island, was established in the 17th century by migrants fleeing the abandoned settlement of Takwa on Manda Island. The charming Swahili village is fringed by a white sand beach. Mnarani Mosque, one of many mosques on the island, is authentic and attractive. Matondoni, in the northwest of Lamu Island, produces the dhows seen gliding between the islands. Kipungani, at the southwest tip of Lamu Island, is a traditional village known for handicrafts and wide expanses of empty beaches.

Takwa Ruins, on Manda Island, are the well preserved remains of a Swahili trading town that flourished in the 15th and 16th centuries before being abandoned when water ran out in the 17th century. The ruins include mosques, tombs and houses, all aligned towards Mecca. Manda Toto Island, just off Manda Island, offers some of the best snorkelling in the archipelago.

Pate Island has a number of historical sites. Pate town is home to the crumbling Nabahani ruins. Siyu, founded in the 15th century, was once a centre of Islamic scholarship, but is now a simple village dominated by a large fort. Faza was destroyed by Pate in the 13th century, and rose again only to be destroyed by the Portuguese in the 16th century. Kunjanja Mosque, on the creek, is Faza’s main attraction.

Kiwayu Island is part of the Kiunga Marine National Reserve, which incorporates a chain of about 50 islands and coral reefs. The reserve provides nesting sites for migratory seabirds, and conserves coral reefs, sea grass and mangrove forests. It is a refuge for sea turtles and dugongs, and home to olive ridley, reef fish, lobsters, sea urchins and starfish. Activities include windsurfing, scuba diving, snorkelling and water-skiing.

Listings In The Lamu Region 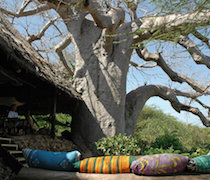 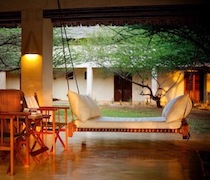 On the beachfront of Manda Island, Beach Tower looks across the channel at the attractive whitewashed houses of Shela Village. Beach Tower is privately owned, built in Swahili style, and adorned with Swahili antiques and modern art. There are 2 en-suite master bedrooms on the first floor, and 6 en-suite doubles on ... 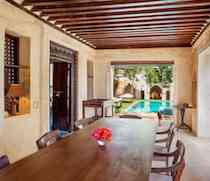 It’s said that the name of this collection of elegant houses was bestowed on them by fishermen on seeing them glowing with moonlight one night. The houses can be taken together or separately; all have Lamu carved doors, hand crafted Lamu furniture, Zanzibar chests, barati ceilings, white washed walls, ... 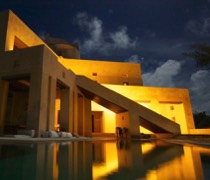 Honeymoon House sits high on the sand dunes, looking down on Shela Beach. This expansive house has a wealth of facilities, including an L-shaped 30-meter swimming pool traversing its courtyard garden, a media room and three boats. The staff of 12 includes a house manager, chefs, guards and boat captains. The ... 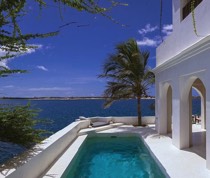 The lovely Forodhani House rises from the seafront of Shela Village, giving it stunning views in all directions. Built in Swahili style, the house combines traditional architecture with modern facilities. With a courtyard garden, swimming pool, plenty of relaxation space and a team of friendly staff, this makes a special ... 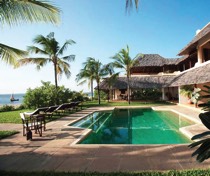 On the southernmost tip of Lamu Island, Kizingoni Beach Villas are a collection of elegant houses set in 23 acres of secluded beach. The luxurious Kaskazi House, formed of 4 towers in landscaped tropical gardens, has 4 doubles and 1 triple. Kusini House, built in Swahili style around its swimming pool, has 3 doubles and 1 ... 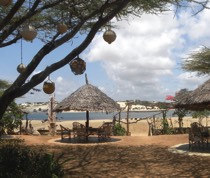 Diamond Beach Village is a collection of bandas on the beach. A short boat trip from Shela, Diamond Beach Village makes a relaxing place to chill out. There are 9 traditional en-suite bandas. Created from palm fronds, the attractive, rustic bandas are furnished with locally crafted furniture. There is also a ... 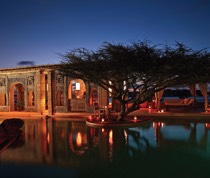 An exquisite resort on Manda Island, The Majlis reflects Lamu’s traditional heritage with a fusion of Swahili, Arabic and Indian architecture. The resort extends along the seafront, and offers a wide selection of facilities and activities. There are 25 en-suite rooms, made up of superior, deluxe and family rooms, as ... 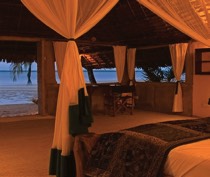 Manda Bay is a small boutique lodge offering informal pampering and barefoot luxury. Located on the northwest tip of Manda Island, one of the many idyllic islands of the Lamu Archipelago, and surrounded by miles of soft yellow sand and acres of bush land behind the lodge, Manda Bay offers ... 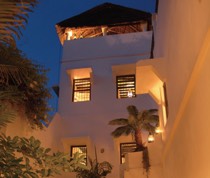 A spacious house with great character, Shela House centres on an open courtyard, the well and an ancient gardenia. The courtyard is framed by seating and dining areas. The house is furnished with traditional Lamu furniture and adorned with local artefacts. There are 5 en-suite rooms, made up of 3 doubles, a ... 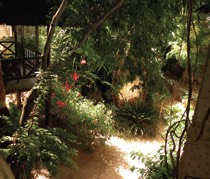 Set in lush tropical gardens, Fatuma’s Tower is a tranquil retreat. It is named after Fatuma Abu Bakar, a Swahili noblewoman who lived here attended by 5 female slaves during the 19th century. After her death and the abolition of slavery, the house fell into ruins. A hundred years later, ... 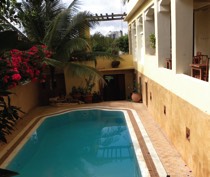 In a sea of whitewashed buildings, Msafini Hotel’s bright yellow façade stands out. The hotel opened in 2009, and combines traditional style with modern architecture. There are 14 en-suite rooms, made up of doubles, twins and triples. Each room has a private balcony. The hotel can be booked for private ... 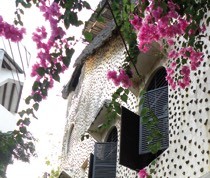 This attractive retreat is formed from a collection of houses set in bright tropical gardens. It offers daily yoga sessions, treatments and courses. The main house, Banana House, has 3 interconnecting en-suite rooms opening onto the garden, 3 en-suite 1st floor rooms with shared terrace and 1 penthouse. Sweet Banana has 1 ground floor ... 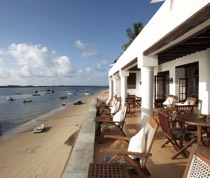 With a name that means heaven in Swahili, Peponi Hotel is a beachfront paradise. The hotel opened in 1967 and has remained in the hands of the same family ever since. There are 24 en-suite rooms, made up of 14 standard and 10 superior. Each room is individually designed and adorned with traditional artefacts. ... 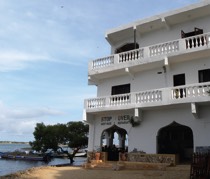 On the seafront near a cluster of boats, Stopover Guest House gleams white against the palm trees. The hotel’s rooms have lovely views across the harbour and of the daily life of the fishermen and boat captains. There are 6 en-suite rooms, all with sea views. The 1st floor has 3 ... 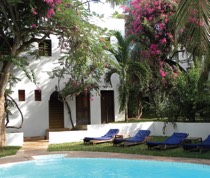 With a name meaning green in Swahili, Kijani House is a lush retreat on the beachfront of Shela. Framed by clusters of frangipani and bougainvillea, this whitewashed Swahili house recreates the atmosphere of the early days of Lamu. There are 9 en-suite double rooms and 2 suites which include living room and ... 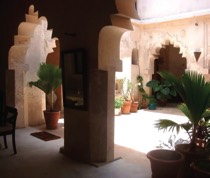 Formerly the house of the Liwali, or governor of the fort, Subira House is unique in style. The current owners bought the house in 1991, when it was in a state of disrepair, and restored it to its former elegance using traditional materials and methods. The house is set around a ... 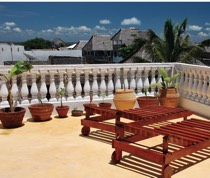 Jambo House, in the centre of Lamu Old Town, offers budget accommodation and has friendly and informative staff. The house is situated in the Old Town, a short walk from the town square and Lamu Fort. It opened in 2008. There are 5 rooms, all with either en-suite bathroom or private external ... 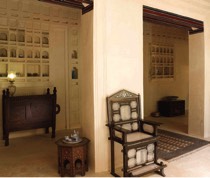 This traditional Lamu house has been lovingly restored and embellished with genuine antiques. The house is intended for visitors who really appreciate the traditional ambience, style and culture of Lamu. Baytil Ajaib has 2 en-suite double rooms and 2 suites. The rooms have a long sitting area with traditional chest, writing desk ... 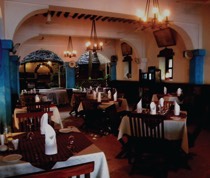 Lamu Palace Hotel is a whitewashed building with thatched roof, located directly on the seafront in Lamu Old Town. There are 22 en-suite rooms and 1 suite. The rooms are all furnished with Lamu 4-poster beds. They are on the 1st and 2nd floors; both floors have communal sea facing balconies. The ... 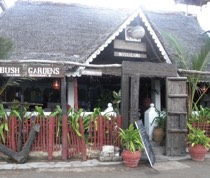 Previously called Tausi Guest House, New Bahati Lodge is a thatched building on the seafront of Lamu Old Town. The lodge is attached to Bush Gardens Restaurant; its reception is in the restaurant and its rooms are entered through the restaurant. There are 5 en-suite double rooms and a rooftop honeymoon ... 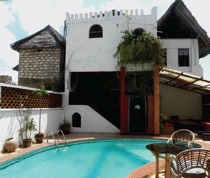 Directly opposite the jetty, Petleys is a landmark on the Lamu seafront. The tall whitewashed building has attractive rooms, a swimming pool with terrace and a glass-fronted rooftop bar with views across the sea. There are 11 en-suite rooms and a penthouse. The rooms all have aircon, and are furnished with ... 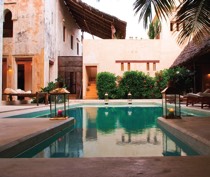 In charming Swahili architecture, Lamu House is an elegant fusion of traditional style and modern facilities. The house faces directly onto Lamu seafront, and is made up of 2 restored houses surrounding a central courtyard with swimming pool. There are 10 en-suite rooms, made up of 4 singles and 6 doubles. One wing of ... 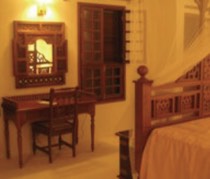 Beyt Salaam, meaning house of peace, is an attractive house which combines traditional Arabian and Swahili styles with modern facilities. The hotel opened in 2010, and overlooks the seafront. There are 4 en-suite double rooms. Ndau room is on the ground floor, Pate and Siyu rooms are on the 1st floor and ... 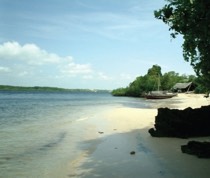 Mike’s Camp, previously known as Munira Island Camp, is on the beautiful and remote Kiwayu Island. It opened in 1992, and has remained since then in the hands of Mike Kennedy, who still hosts the camp personally. There are 7 en-suite thatched bandas, made up of 6 doubles and 1 family banda. 6 bandas ... 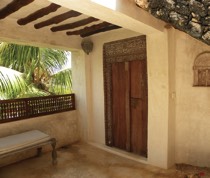 According to legend, Baitil Aman was built in the 18th century by Hajj Abdalla as a gift for his bride, the beautiful Binti Luali of the Shela clan. The building collapsed, but so great was Hajj Abdalla’s love for Binti Luali that he rebuilt the entire palace. Rich with ...