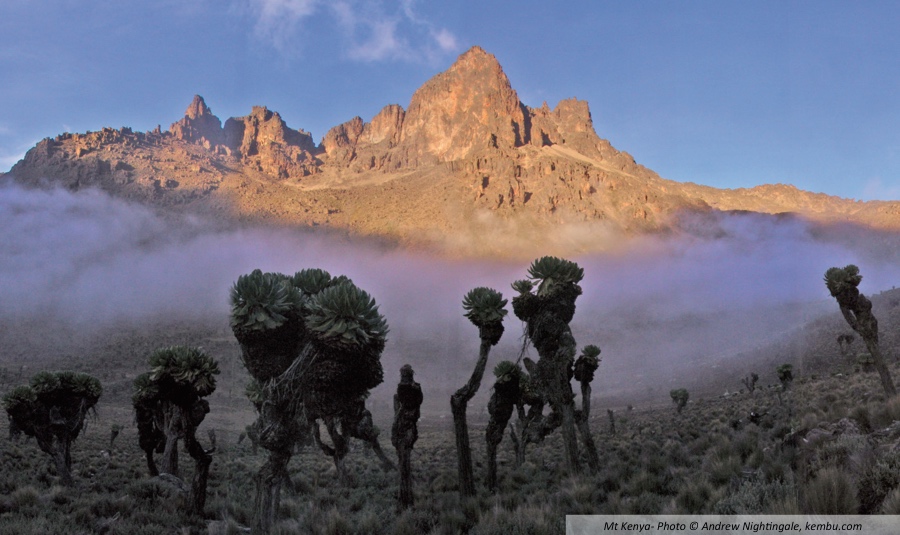 The major towns are Thika, Muranga, Nyeri, Nyahururu, Nanyuki, Meru and Embu. Made famous by Elspeth Huxley’s Flame Trees of Thika, Thika is now known for pineapples and coffee. Muranga, called Fort Hall in colonial times, is now a lively provincial capital. Nyeri is the gateway to the Aberdare National Park, Nanyuki to Laikipia, Meru to Meru National Park and Embu to Mwea National Reserve. Nyahururu, called Thomson’s Falls by the British, is Kenya’s highest town.

Nanyuki has a busy domestic airport. Airstrips suitable for charter flights are dotted around the region. A good road system links the towns; 4WD vehicles are required in the national parks. Kikuyu, Meru and Embu are the traditional inhabitants of the region, now home to a diverse mix of tribal groups.

At just over 5,100m, Mt Kenya is the highest mountain in Kenya, and the second highest in Africa after Mt Kilimanjaro. According to Kikuyu tradition, the mountain is the throne of the god Ngai who bestowed the surrounding highlands on the Kikuyu people. The mountain’s original name, Kirinyaga, has been condensed to Kenya, giving the country its name. The three peaks of Mt Kenya are Batian, Nelion and Point Lenana. Batian and Nelion require professional climbing equipment. Point Lenana can be climbed along the Naro Moru, Sirimon, Chogoria, Burguret and Timau routes. Guides and porters can be booked through adventure tourism companies, or hired privately in towns around the mountain.

Aberdare National Park comprises a range of lush mountains adorned with forest, ravines and waterfalls. In 1952, the young Princess Elizabeth was staying at Treetops in the Aberdare National Park when she learned she was now Queen of England. Wildlife includes rhino, leopard, colobus monkey and the elusive bongo; 250 species of birds have been recorded. Park gates are at Ark, Treetops, Ruhuruini, Kiandagoro, Mutubio, Wandare, Shamata and Rhino. There is an airstrip at Mweiga. Activities include game viewing, bird watching, camping and trekking.

Ol Pejeta Conservancy, a non-profit wildlife conservancy in the undulating foothills of Mt Kenya, is the largest black rhino sanctuary in East Africa. It also has the last three remaining fertile northern white rhinos in the world, and is the only place in Kenya to see chimpanzees. With a high density of predators including all the big cats, and large numbers of endangered species, this conservancy offers excellent game viewing.

Meru National Park has wooded grasslands, thorny bush and dense riverine forest. It was the former home of Joy and George Adamson, and Elsa the lioness of Born Free fame. Wildlife includes rhino, cheetah, leopard, Grevy’s zebra, reticulated giraffe and bush pig; over 300 species of birds have been recorded. Park gates are at Murera and Ura. Airstrips are at Kina, Mulika and Elsa’s Kopje. There is a public campsite at Bwatherongi.

Thomson’s Falls was named for Joseph Thomson, a naturalist and geologist from Scotland who, in 1887, was the first white man to see the spectacular waterfalls. The viewpoint, at which viewing fees are charged, is cluttered with curio stalls and traditional dancers. Mwea National Reserve and Ol Donyo Sabuk National Park are small, little-visited gems. Mwea is known for its dam and abundance of rare water birds; Ol Donyo Sabuk is known for its mountain and the Fourteen Falls. Both offer game viewing, bird watching, trekking and camping.

Listings In The Central Highlands Region 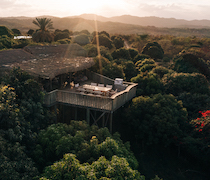 This 500-acre mature fruit farm grows 35 varieties of fruits, including mango, passion, guava, lemon, orange, lichee and dragon fruit. The farm is committed to eco-farming, uses black soldier fly composting, reworks the soil, and operates on solar power. Ostriches, guinea fowl and plentiful birdlife are seen throughout the farm. The ... 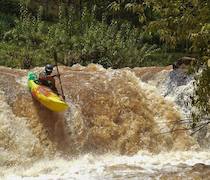 Savage Wilderness brought white-water rafting to Kenya in 1990, when the team made their first trip down the Athi River. Known for a wealth of adventure sports, Savage Wilderness is in spacious mature gardens on both sides of the river. The 20 en-suite rooms are in 10 cottages. Each room has 2 or 3 beds, ... 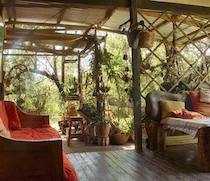 In the forests of Mt Kenya, Africa’s second highest mountain, stands Karichota. With views of the mountain’s three craggy peaks, Karichota is the home of The Theatre Company. The centre has a selection of artists, writers and yoga retreats, and welcomes people who need time and space to ... 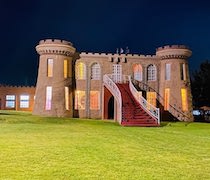 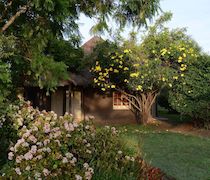 Infamous multi-millionaire Adnan Khashoggi built these rooms as stables for his horses. They were subsequently converted into Ol Pejeta’s Research Centre, and have now been refurbished as affordable accommodation. There are 11 single rooms, 2 en-suite double rooms and a twin tent with 2 single beds. The single rooms and the twin ... 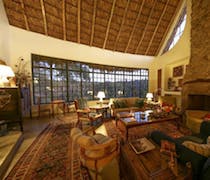 In the foothills of Mt Kenya, Olepangi Farm has a main house and cottages, sweeping gardens, striking views and a stable of horses. Olepangi House has 3 bedrooms, lounge, living room, dining room and several balconies. Markham Cottage has 1 en-suite bedroom and is set apart for more privacy. The Round House, ... 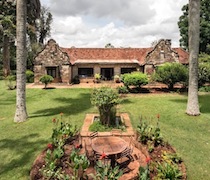 This lovely farmhouse stands in a sprawling coffee plantation. Built in the 1930s, it was the home of the legendary Beryl Markham, known for her daring flights in the early days of aviation, and for her gift in training even the most capricious horses. The house, looking over mature gardens ... 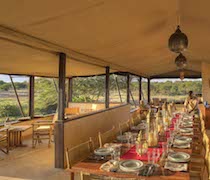 On the banks of the Ewaso Nyiro River in Ol Pejeta Conservancy, Ol Pejeta Bush Camp is an atmospheric traditional safari camp. The camp is owned and managed by Alex Hunter. The 7 en-suite tents all have comfortable locally crafted furniture, rechargeable solar lights, safari showers and verandas overlooking the river ... 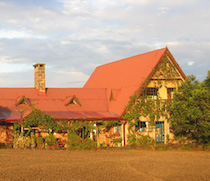 Sandai Homestay and Cottages are on a farm near the Aberdare National Park. The comfortable farmhouse is surrounded by indigenous flora and interesting animals, and offers a homely and relaxing atmosphere, and a range of activities. There are 2 double rooms with shared bathroom in the main farmhouse. There are also 4 ... 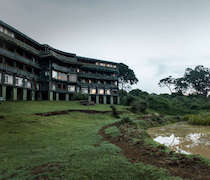 Located at an altitude of 1950m, Serena Mountain Lodge is surrounded by a dense, ancient rainforest that comes alive at dusk with a chorus of sounds. The rocky, white-capped peaks of Mt Kenya tower over the lodge, providing a striking setting for game viewing. The lodge is one of the ... 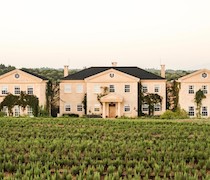 The River Valley House is a Palladian style house near the River Burguret. The house is taken on an exclusive basis, and makes an ideal base from which to do fishing, flying and photographic safaris around Kenya. The main house has 5 en-suite bedrooms. The master bedroom has a circular balcony ... 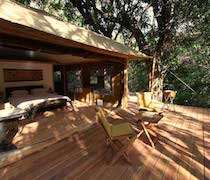 Rhino River Camp, which opened in 2009, is a stylish tented lodge near the rhino sanctuary that gives it its name. The eco-camp is set in 80 acres of privately-owned land adjacent to Meru National Park. The 8 en-suite rooms are positioned amongst raffia palms, yellow fever trees and tamarind trees on the ... 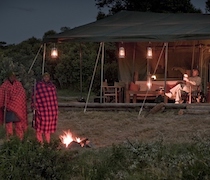 Tucked into a valley and shaded by acacia trees, Porini Rhino Camp sits on the banks of a seasonal river. Located in the lovely Ol Pejeta Conservancy, the camp has access to all this 90,000-acre conservancy offers. The conservancy is home to a wide variety of species of animals, including ... 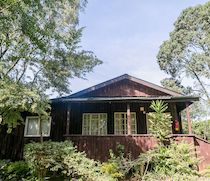 This log-cabin style lodge has been dubbed the base for climbing Mt Kenya for its tailor-made mountain climbing itineraries backed by its experienced teams of guides and porters. Naro Moru River Lodge supplies a wealth of information on the mountain, its zones of vegetation, and the pros and cons of ... 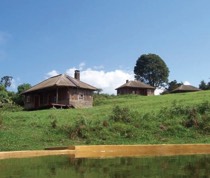 Castle Forest Lodge nestles in a rain and bamboo forest, listed a UNESCO World Heritage Site for its large variety of endemic species such as the lobelias, the senecios and the rock hyrax. On the slopes of Mt Kenya, the lodge is committed to maintaining the fragile ecological balance of ... 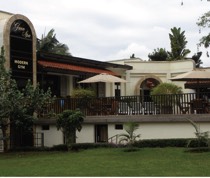 Set in landscaped gardens, Green Hills Hotel is a lush haven in Nyeri. The 110 en-suite rooms all have desk, telephone, TV and free WiFi. The superior rooms have king size beds, writing table and chair. The executive rooms are more spacious. The deluxe rooms have 4-poster beds and lounges. Tetu ... 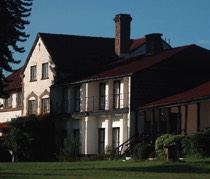 The Outspan Hotel opened in 1929. The elegant hotel is steeped in history, its guest list sprinkled with aristocracy. Paxtu Cottage, the final resting place of Lord Baden-Powell, founder of the Scouting Movement, is now a museum displaying an extraordinary collection of memorabilia. Set in manicured tropical gardens containing a massive 50 ... 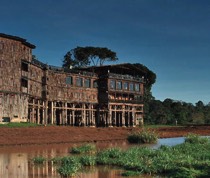 Treetops started as a 2-room tree house in 1929. It aroused international interest in February 1952 when a young British visitor climbed into the tree as Princess Elizabeth and climbed down the following morning as Queen Elizabeth II. The lodge is now raised on stilts and has 4 decks and a rooftop viewing ... 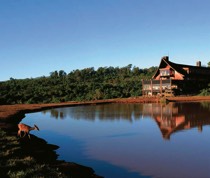 The Ark, shaped like a ship with wood-panelled alleys and port holes, overlooks a waterhole in the Aberdare National Park. Passengers board the Ark on a wooden gang plank and are given a ‘sailing certificate’ when they leave. The Ark operates with the Aberdare Country Club. Guests stay at the ... 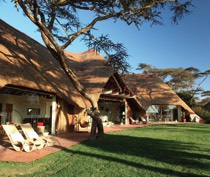 Solio combines a working ranch with a wildlife sanctuary that provides refuge for wildlife that would otherwise be deprived of suitable habitat. Solio Ranch was established in 1970, and has become recognised as a successful rhino breeding ground. It has translocated 100 black rhino and 60 white rhino to destinations around Kenya. Solio ... 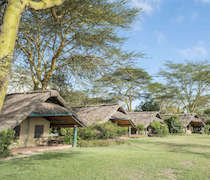 The Sweetwaters Chimpanzee Sanctuary is the only place in Kenya to see this endangered and highly intelligent species. The sanctuary opened in 1993 as refuge for orphaned and abused chimpanzees from west and central Africa; the first 3 arrived that year from Bujumbura, evacuated from Burundi at the outbreak of civil war. ... 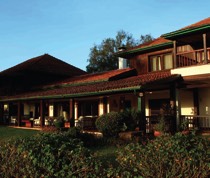 Originally the home of Lord Tom Delamere, and subsequently the property of the infamous multi-millionaire Adnan Khashoggi, Ol Pejeta House is a private house that resonates with past events. The pictures on the walls, the secretly interlinking rooms and the grand views hark back to a bygone era. Set in ... 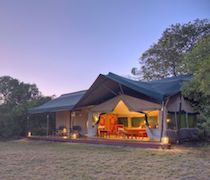 Nestled in indigenous forest overlooking a waterhole, Kicheche Laikipia Camp is in the centre of Ol Pejeta Conservancy. The camp is small and intimate, and offers quality game viewing and an authentic experience. There are 6 en-suite tents, made up of twins and doubles and 1 triple. Meals blend African and European ... 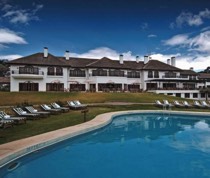 Founded in 1959 by the film star William Holden, Fairmont Mount Kenya Safari Club has a colourful history and a list of members that reads like a ‘Who’s who’ of royalty, aristocracy and film stars, many of whose photos line the walls of the bar. The club, set in manicured ... 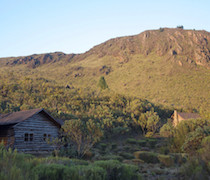 These atmospheric log cabins on the edge of Lake Rutundu became suddenly famous in 2010 when Prince William proposed to Kate Middleton here. At an altitude of 3060m, the cabins face the northeastern crags of Mt Kenya. The 2 self-catering log cabins have open fires and scenic mountain views. The main cabin ... 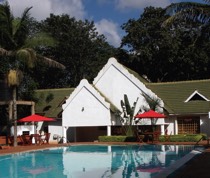 Named after the keen angler who lived in a farmhouse on this site, the Izaak Walton Inn was established as a hotel in 1948. Set in 9-acre grounds, the inn is an eclectic mix of old colonial style, modern buildings, exotic gardens and local Kenyan customs. There are 90 en-suite rooms, made ... 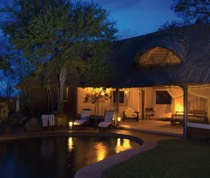