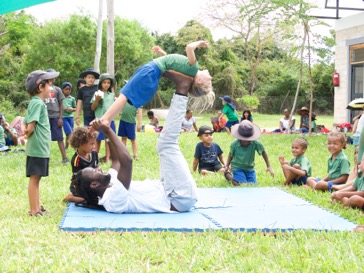 Mike started his yoga journey in 2008 by joining Africa Yoga Project, where he finished his Yoga Anatomy and Pranayama course and did Yoga Hands On: yoga assistance training in 2010 and 2013. From 2011, Mike was teaching yoga in Nairobi’s slums where he was training a young and underprivileged footballers’ team and youth with epilepsy.

In 2014 Mike attained his Teaching Yoga for Kids certificate and attended a Prenatal Yoga course. Mike has also participated in various workshops led by international Synergy/Acro yoga teachers since 2008.

Mike is also a beadwork artist and is inspired by light, creating chandeliers, candleholders and other illuminating objects. Currently Mike is teaching on Kenya’s South Coast and specialises in Vinyasa, Acro, Yoga for Kids and Prenatal Yoga.

We have not been advised of any upcoming events with Michael Wendo Mulama.